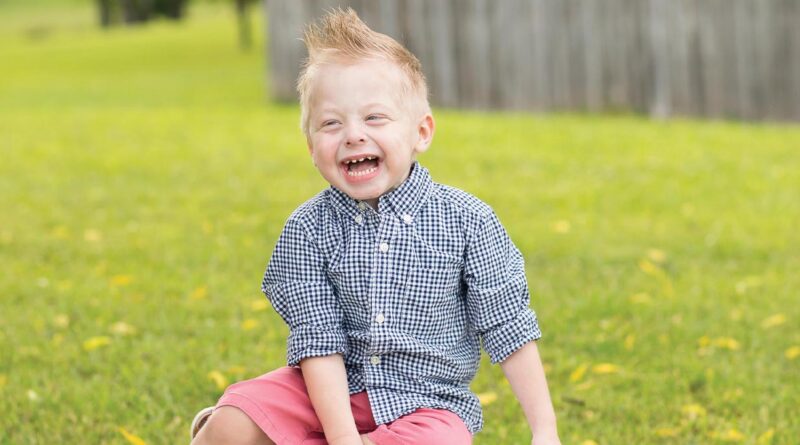 Finley had a lifesaving kidney transplant at Monroe Carell Jr. Children’s Hospital at Vanderbilt in January, and since recovering, he loves to run.

“You hear the little pitter patter of his feet all over the house, from dawn to dusk,” says Finley’s mom, Alyssa. “It’s a beautiful sound.”

When he stops running, it’s to make silly faces and giggle at his sister, Leila, 7, or to snuggle with his mom and dad.

“One of his favorite things to do is cuddle, which we do not complain about at all,” Alyssa says. “He’s just a little blond-haired, blue-eyed ball of sunshine.”

Late last year, Finley was not well enough to run. He was in renal failure, having hemodialysis three days a week to filter waste and water from his blood, and waiting — waiting for a kidney that would save his life.

Finley was born in September 2018 in Knoxville, Tennessee, at 31 weeks of gestation and weighing just over 2 pounds. He spent four months in the neonatal intensive care unit in Knoxville before being transferred to the NICU at Monroe Carell.

“It was scary and very overwhelming, but we felt confident that the doctors at Monroe Carell could meet Finley’s needs and take care of him,” Alyssa says.

The Hickmans had learned at the 20-week ultrasound scan during Alyssa’s pregnancy that there were problems with Finley’s kidneys.

Two kidneys — shaped like the beans named after them — are located just below the rib cage on each side of the spine. They filter the blood, removing waste and extra water to make urine, which flows from the kidneys to the bladder through thin muscular tubes called ureters and is excreted from the bladder through the urethra.

The kidneys, ureters, bladder and urethra form the urinary tract, which is grouped with organs of the reproductive system as the “genitourinary system” because of proximity, developmental origins and common structures (like the male urethra). During embryonic development, complex interactions between various tissues direct the formation of the genitourinary system, and disruptions can occur.

“The genitourinary system is the second most commonly affected organ system for congenital anomalies after the cardiovascular system,” says John Pope, MD, professor of Urology and Pediatrics and director of the Division of Pediatric Urology, which is ranked No. 8 in the U.S. “There’s a vast number of children who have congenital anomalies of the kidney, ureter, bladder, genitalia and pelvic organs.”

Often, anomalies of the genitourinary system are detected on prenatal ultrasound, and patients are referred to pediatric specialists in urology and nephrology for prenatal evaluation.

“When I was training, people would have surprise diagnoses after birth, but now most people learn about congenital abnormalities before birth,” says Kathy Jabs, MD, associate professor of Pediatrics and chief of the Division of Pediatric Nephrology. “The mother gets seen before the child is born by nephrology and urology, and also by neonatology, so we can talk about what to expect — the range of things to expect. It’s a really nice partnership.”

Nephrologists care for children with congenital kidney abnormalities, kidney injuries — perhaps because the child was born prematurely and had heart problems and limited blood flow to the kidneys, glomerular nephritis (inflammation of the kidney) for various reasons, high blood pressure and kidney stones.

In addition to filtering waste and excess water, the kidneys maintain the blood’s acidity and balance of salt and minerals. They also produce hormones that regulate blood pressure, participate in red blood cell production, and contribute to bone maintenance. Children with kidney failure require multiple medications to do the things that their kidneys can’t do, Jabs says.

“Our relationship with nephrology is incredibly interconnected,” Pope says. “Pediatric nephrologists are caring for children with renal function problems and renal failure, and we (pediatric urologists) are dealing more with the drainage system: the structural anatomy of the genitourinary tract.

“We work very closely with each other because many children have nephrology and urology issues that intertwine.”

Kidney stones — hard deposits of minerals and salts in the urine — are a good example. Monroe Carell offers a Pediatric Kidney Stone Clinic where patients see both urologists and nephrologists in the same clinic. Kidney stones can require a surgical intervention performed by a urologist, while a nephrologist seeks to understand what is causing kidney stones and what can be done to prevent them.

“In the case of kidney stones, and for many issues, we work together on different aspects of the same problem,” Jabs says.

Finley’s care has involved both urologists and nephrologists, along with a range of other specialists.

Although it was clear from imaging studies that Finley’s kidneys were not correctly formed, his most urgent needs after his transfer to the NICU at Monroe Carell were urologic. He required several urologic surgeries, including a ureterostomy — the connection of his ureters to the abdominal wall so that urine could exit outside the body.

Finley also has feeding and gastrointestinal concerns and sees gastroenterologists at Monroe Carell. He has a gastrostomy tube (G-tube), a surgically placed device to give direct access to the stomach.

After his discharge from the NICU, Finley had recurrent urinary tract infections and fevers. “He was in and out of the hospital quite often,” Alyssa says. “It would be like his body had raging infections, but then it didn’t. It was very confusing.”

Because of his kidney concerns, Deborah Jones, MD, professor of Pediatrics at Vanderbilt, who was Finley’s nephrologist at the time, managed his care even when he went to the hospital in Knoxville.

“Eventually, we got to the point where we just came straight to the emergency room at Monroe Carell,” Alyssa says. “It was worth it to drive three-and-a-half hours for care that was more tailored to his needs. Finley’s body doesn’t follow the rules. Every doctor in the nephrology group knows Finley, and they’re all phenomenal.”

Finley was born with a “pancake kidney” — his two kidneys are fused together and centrally located in the pelvis. For a short time, his fused kidneys worked well enough, Alyssa says, but they gradually started losing function. Alyssa, who is a high school math teacher, watched as the laboratory test values for kidney function changed.

“I like to know the numbers; they make sense to me,” she says. “From the labs, you could see his kidney function deteriorating; it was really obvious.”

So, although it wasn’t a surprise when Jones officially referred Finley to be evaluated for a kidney transplant, “it was a lot scarier than you think it’s going to be — to actually be going down that road,” Alyssa says. “Thankfully, we were so confident in who was taking care of Finley that we were able to go into it with a lot of peace.”

The wait for a kidney

Patients who are referred to Monroe Carell for a kidney transplant undergo a thorough evaluation and are presented to a selection committee that discusses their case and determines if the child is ready to be listed for a transplant.

Michelle Mitchell, RN, BSN, pediatric kidney transplant coordinator, works with families from the time of referral throughout the transplant process. She schedules all the appointments, makes sure that requirements are met, does pre- and post-transplant education for patients and families, and makes sure that families have all the supplies and medications they need after discharge.

Jabs, medical director of the Pediatric Kidney Transplant Program, cares for all of the pediatric transplant patients — 10 to 15 per year.

Kidneys for transplant can come from a living donor (an adult with two healthy kidneys) or from a deceased donor. A living donor is preferred when possible because the transplanted kidney “performs better, lasts longer and has fewer complications,” says David Shaffer, MD, professor of Surgery, surgical director of the Pediatric Kidney Transplant Program, and Finley’s transplant surgeon.

Transplants from living donors can also be scheduled preemptively before a patient needs dialysis.

After Finley was evaluated in February 2021 and then listed for transplant, the Hickmans hoped to find a living donor. Neither of Finley’s parents qualified, and after searching among close family and friends, they began sharing Finley’s story via social media and news stories.

As they waited, Finley’s health deteriorated. In October 2021, he was admitted to the Monroe Carell intensive care unit with a marked decrease in his kidney function, so that he urgently needed to start dialysis treatments. He was able to be discharged for outpatient dialysis three times per week, and the family moved to Nashville for his care.

In November 2021, they got the news they had prayed for — a living donor was available and surgery could be scheduled. After a delay from a positive COVID-19 test, Finley received his kidney transplant on Jan. 5.

Shaffer was able to place the new kidney without removing the pancake kidney, which had been a concern, and Pope moved Finley’s urostomy conduit to a new location. Transplant and urologic surgeons “work often and well together,” Shaffer says. He adds that “Monroe Carell has all the subspecialties aligned to be able to provide complicated care to the most challenging patients, and we have very good outcomes.”

“We have been very impressed with Monroe Carell and everything they’ve done, specifically urology and nephrology,” Alyssa says. “Those doctors have worked so hard for Finley.”

The transplanted kidney continues to “work beautifully,” Alyssa says. “We’ve had to troubleshoot some things and tweak medicines, but he’s growing and doing great.”

Alyssa remains in awe of Finley’s donor, a stranger — now a friend — with three children, who saw a Facebook post and felt drawn to Finley.

“She told us that she felt like she had Finley’s kidney, and she wanted to get it to him so he could be a wild little boy, like her little boy is,” Alyssa says.

A wild little boy, running through the house. 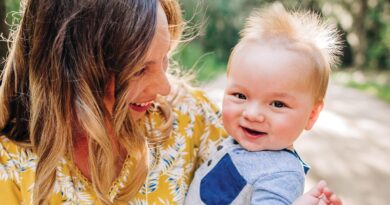 March 17, 2022 Emily Stembridge Comments Off on Care Before Birth 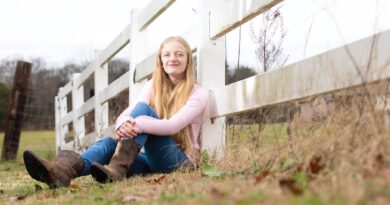 Back in the Saddle

March 17, 2022 Leigh MacMillan Comments Off on Back in the Saddle 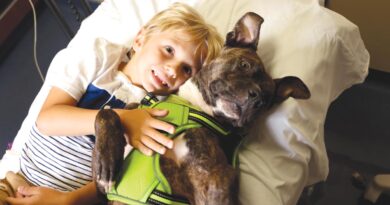