Kix Brooks and Clarence Spalding wouldn’t consider themselves natural born fundraisers, but they happen to share a deep and longstanding commitment to the children and families served by Monroe Carell Jr. Children’s Hospital at Vanderbilt. This shared devotion has led them to become two of the hospital’s leading advocates.

Brooks came to fame as one-half of the country music duo Brooks & Dunn, who’ve recorded 23 No. 1 singles and sold more than 30 million albums.

In the early 90s Brooks & Dunn were asked by their manager at the time to donate all proceeds from what would be their first sold-out Nashville appearance (at Starwood) to Children’s Hospital.

“That’s a big ask,” Brooks says with laughter. “I thought, maybe I should go down there and see what this is.

“And after spending a couple of hours in there talking to families and children, I’m like, good grief, you bet! I can’t imagine anyone with a heart not embracing what’s going on at Vanderbilt Children’s.”

Spalding has been a Children’s Hospital supporter for nearly a decade. Last year, while visiting the hospital with

Rascal Flatts, he was reminded why. Sitting in the front row for the Flatts’ performance, was a girl who Spalding knew from his son’s high school.

“She had lost 60 pounds and had no hair. We started hugging and crying and the guys were performing and didn’t know what was going on,” Spalding said.

“We invited her back to have lunch with the guys, and she said she just wanted to make it to CMA Music Festival.

“I can’t imagine hearing that as a parent, that your child just wants to live a few months more.”

Spalding and Rascal Flatts got her a VIP pass to CMA Music Festival, and Spalding reports that the family friend has since remained cancer free.

When you hear the word “Vanderbilt,” Brooks says, “you think plenty of money.

“That’s what pops in most people’s minds. They don’t realize that Vanderbilt is a non-profit, and we really need help and funding. It’s a regional hospital that serves so many communities, and so many underprivileged communities and families that walk in the front door without a clue other than a child in their arms, not knowing where else to turn.” 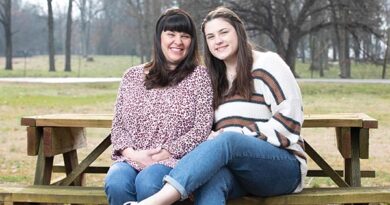 March 17, 2022 Christina Echegaray Comments Off on Pay it forward