Holly Tyler, RN, BSN, has a knack for writing jingles.

What started off as a kind gesture — writing a little ditty to say goodbye to one of her longtime patients — has turned into a standard send-off for oncology patients at Monroe Carell Jr. Children’s Hospital at Vanderbilt.

Sung for the first time on June 15, 2011, to Marshall Billingsley, then 17 (now 24), the “Last Chemo” song has been used to serenade hundreds of patients since.

“The day Marshall completed his last chemo also happened to be the day he was being discharged,” recalled Tyler, who was one of his primary nurses. “I just kept thinking, I want to do something special for him.

“I ran to the fishbowl [the area where the nursing staff congregates] to think about a tune that everyone would be familiar with. The first thing that popped in my head was ‘The Macarena.’”

“The Macarena” was a worldwide hit for the group Los del Rio in 1993, and the earworm-ready tune and its accompanying dance have been recognizable and popular since.

After Tyler had a tune in mind, she started Googling words that ended in “-tion.”

And the rest is history.

For 10 years, Tyler, who came to Vanderbilt in 2005, worked as a nurse on the Pediatric Hematology/Oncology inpatient service. She joined the clinic staff in the Doctors’ Office Tower in 2015.

And when she did, she heard the staff singing a song with the same lyrics, but the tune was off.

“When I first heard it over here, I was like, ‘that’s really not how it goes.’ Of course, people asked how I knew. I told them, ‘Because I wrote it,’” laughed Tyler.

Now, everyone sings the song to the tune of “The Macarena,” much to the delight of patients and families.

Facts about the Program for Children with Medically Complex Needs

June 20, 2017 durend Comments Off on Facts about the Program for Children with Medically Complex Needs 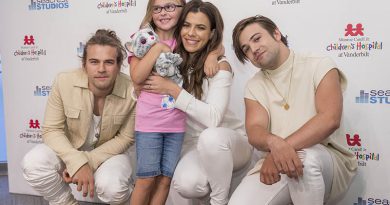