Ansley McLaurin’s glistening blue eyes and precious smile are hard to miss as she twirls around in her turquoise ballerina tutu. The 8-year-old’s vibrancy shines through in her love for dancing—and an occasional game of tic-tac-toe.

Her cheerful, well-mannered demeanor makes it hard to believe that five years ago her body was rampant with metastatic cancer; or that she endured 52 weeks of chemotherapy and six weeks radiation; or that she had part of her lung removed.

Ansley had been diagnosed with pleuropulmonary blastoma (PPB), a very rare cancer of the lungs that occurs most often in children, from newborns through about age 12. Fewer than 100 children are diagnosed with PPB in the United States each year.

She suffered from an aggressive form of PPB, Type II, which requires a comprehensive, multidisciplinary treatment plan. Tumors such at these are extremely complicated to treat, requiring intensive chemotherapy, surgery and sometimes radiation. At any given time, Ansley has had physicians, surgeons, nurses, therapists from at least a dozen different disciplines involved in her care.

“Ansley’s case highlights how important it is to be at a large tertiary children’s hospital where we have experts who can develop integrated and effective treatment plans for patients with complicated malignancies,” said Scott Borinstein, M.D., Ph.D., assistant professor of Pediatrics. “PPB is a cancer that presents in the lungs, but her cancer was unique in that it had spread to her bones at diagnosis and she also had a kidney mass at the same time. The cancer had spread throughout her body. When we met her, she was riddled with metastatic disease.”

Ansley’s story began in December 2009, when her parents, Scott and Amy McLaurin, brought her to the Emergency Department at Monroe Carell Jr. Children’s Hospital at Vanderbilt for a stubborn persistent cough, fever and rapid heartbeat. A chest X-ray showed a complete whiteout of her lungs, usually an indication of fluid and lack of oxygen. An aggressive case of pneumonia was noted as a possible diagnosis.

Furthest from their mind was a cancer diagnosis. It was a possibility, but they hoped not a reality. Body scans, however, showed multiple tumors, from her shoulders, spine, pelvic bone, lungs, ribs and down to her right knee. A biopsy confirmed their worst fears: malignant, complex and metastatic cancer.

The family had a lot to process. Ansley was a couple months shy of 3 years old. And the McLaurins had an 8-week-old son, Britton.

“The team was extremely supportive. They told us of all the possible diagnoses and allowed us time to process all of this difficult information,” said Amy McLaurin. “We were beginning a very emotional journey. We had to come to accept that our baby girl likely had cancer so that we could move forward with helping her through treatment. The team of providers was with us every step of the way.”

There was no time to waste. Five days after diagnosis, on Christmas Eve 2009, when most children are tucked snug in their beds with anticipation of Santa’s arrival, Ansley was getting her first dose of chemotherapy.

Dai Chung, M.D., chair of the Department of Pediatric Surgery and the Janie Robinson and John Moore Lee Professor of Pediatrics, performed Ansley’s biopsy of the primary tumor in the lung. The tumor was too large and entangled near the heart to remove it at the time. Chung, along with Borinstein, opted to start a therapy regimen, similar to one used to treat metastatic sarcoma, to shrink the tumor before a definitive operation.

“Ansley was able to receive the comprehensive pediatric cancer treatment at our hospital that was absolutely essential for her successful outcome,” said Chung. “A multidisciplinary pediatric cancer program requires expertise of numerous services from oncology, surgery, radiation therapy, pulmonology, cardiology, critical care, anesthesiology and others that we have at Monroe Carell Jr. Children’s Hospital at Vanderbilt.”

Chung finally was able to resect her tumor involving the lung despite its very delicate location near vital structures. “Her operation was challenging, but fortunately we were able to safely resect the tumor entirely,” he said.

Like many cancer patients, Ansley will receive continued follow-up care and support for the long term. She has chronic issues resulting from cancer therapy, including scoliosis due to the partial removal of her lung; loss of thyroid function from radiation; sensory neuropathy (nerve damage) in her foot; lung insufficiency; and osteoporosis.

“We have strived to deliver the best care to Ansley, and we continue to provide follow-up care to manage the unfortunate side effects of dealing with advanced cancer. She is plugged into multiple resources, and we all work together to deliver integrated care.” Borinstein said. “She’s almost 5 years off therapy and is thriving.”

Ansley continues to have frequent visits to Children’s Hospital, where she sees all of her “friends,” her care team of doctors, nurses, Child Life specialists, pharmacists and many more.

“Ansley and our family were blessed by all of the specialty care at Children’s Hospital during her cancer treatment. However, if we did not continue to have access to a medical center with all of the specialists available to treat her side effects, I feel strongly that her health and quality of life would certainly not be what it is today,” said Amy McLaurin.

In addition to the team care she received, Chung credits Ansley’s parents with her recovery.

“Ansley is a precious little girl who triumphed against PPB. I’m equally amazed by her incredible parents. Ansley fought and won against this devastating cancer because of her parents’ unconditional love and strong faith,” he said.

June 21, 2011 Christina Echegaray Comments Off on Leading the Way 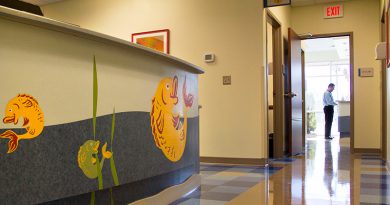