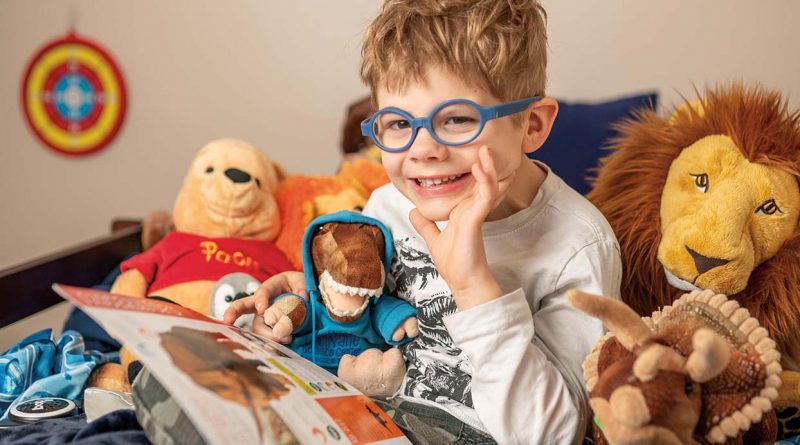 Six-year-old Jude Kee pulled out the book “Little and Big” from his backpack along with a note from his kindergarten teacher instructing him to read aloud to his family as homework. Much to the surprise of his parents, Amy and Lorin Kee, he began reading the book — without any help.

Learning to read words is a typical childhood milestone that often begins in kindergarten, starting with the sounds of letters then the recognition of sight words like “the” and “is.”

But the Kees weren’t always certain Jude, diagnosed at 18 months old with cancer in both eyes, would be able to read, or if he would have his eyesight.

“He prefers for us to read to him, so when he began to read, I called my husband, Lorin, into his room. We both looked at each other, smiling. We were absolutely astounded,” Amy Kee said. “After that night, he started reading to us every night. We still sometimes read to him, and sometimes his brother Alex reads him “Harry Potter,” but he can even read small chapter books now, like “Magic Tree House.”  His favorites are the superhero books, though.”

For the Kees, the momentous occasion signaled far more than the basics of learning to read. Rather, it was another indication that the decision to embark on a novel therapy to save their son’s eyesight was the right choice.

Because of the innovation and cross-discipline expertise offered at the Tennessee Lions Pediatric Eye Center at Monroe Carell Jr. Children’s Hospital at Vanderbilt, the Kees see a bright future for their youngest child.

The highly specialized team provides care and surgery to treat children and teenagers who have a variety of vision disorders, including cataracts, crossed eyes or intraocular tumors.

“It is a wonderful opportunity to partner so closely with a major children’s hospital and to have all of these subspecialists under one roof,” said Sean Donahue, MD, PhD, professor and chief of Pediatric Ophthalmology at Children’s Hospital. “It gives parents such a great ability to have all of their care in one place.”

Leaders in an emerging therapy

The Vanderbilt Eye Institute has been an innovator in vision care for more than 25 years, and Jude’s case is one of the latest examples.

In 2014, Jude’s pediatrician referred him to a specialist after his parents suspected a condition called amblyopia, or lazy eye. The day Jude was diagnosed with bilateral retinoblastoma, the most common form of ocular cancer in children, is a day forever imprinted in the Kees’ minds. His right eye had four small tumors, they learned, while his left eye was completely consumed with tumors.

Traditional treatment would have involved systemic chemotherapy, external beam radiation and/or surgical removal of the affected eyes. In consultation with the pediatric eye team and pediatric oncology, the Kees opted to try an emerging therapeutic approach called intra-arterial chemotherapy or IAC.

Performed on an outpatient basis (with an overnight stay for observation), the chemotherapy is delivered directly to the tumor via an ophthalmic artery, using an endovascular catheter that is inserted into the groin and threaded to the eye under X-ray guidance. The treatment limits the adverse effects typically associated with systemic chemotherapy.

Vanderbilt is one of just a few centers in the country offering the novel therapy. Jude was the first patient at Children’s Hospital to have the IAC procedure under the direction of Anthony Daniels, MD, assistant professor of Ophthalmology and Visual Sciences Cancer Biology, and Radiation Oncology at Vanderbilt Eye Institute. Daniels arrived at Vanderbilt in 2013.

An estimated 3 percent of Tennessee’s 1.2 million children have some type of eye problem other than a need for glasses. Read more »

Debra Friedman, MD, director of the Division of Pediatric Hematology/Oncology and associate professor of Pediatrics, who holds the E. Bronson Ingram Chair of Pediatric Oncology, works in concert with Daniels to offer IAC and other innovative therapies to treat retinoblastoma at Children’s Hospital.

When Friedman joined the faculty at Children’s in 2008, she started the retinoblastoma program but was limited on the kinds of treatments the hospital could provide. Prior to her arrival, patients diagnosed with the ocular disease were sometimes sent to other centers for treatment. As time passed, Friedman was able to expand the program, offering more therapy options for patients.

Over the past decade, the program has grown tremendously, said Friedman, who was one of the founding members of the retinoblastoma committee for the Children’s Oncology Group (COG).

“In 11 years, we have gone from sending many of our patients to other centers to being able to offer the most advanced care right here,” said Friedman. “We are the only program in the state providing the full gamut of therapies for retinoblastoma, including IAC. We have been able to build a very strong team.

“Every patient here deserves the option for the very best care possible,” she said. “In the past five years, we are able to offer every therapy to every child.”

The treatment options include enucleation or removal of the eye, intravenous or systemic chemotherapy, IAC, intravitreal chemotherapy (given directly into the eye), laser therapy, thermotherapy or cryotherapy. Radiation therapy is also an option but is avoided whenever possible due to the short- and long-term side effects. Since starting the program at Children’s Hospital, Friedman notes that no patients have required treatment with radiation therapy.

A patient might receive one, or a combination, of the available therapies. Treatment depends on if one or both eyes are affected, the tumor size, location and number of tumors.

With the introduction of the most cutting-edge therapies, the retinoblastoma team has been able to save eyes that in the past would have required removal and to radically change the way the disease is treated.

Upon arriving, Daniels’ goal was to introduce the most advanced therapies for retinoblastoma treatment with the overarching goal of saving lives, eyes and eyesight. The hospital was an early adopter of the novel therapy.

“We were the first in the Southeast to offer IAC and intravitreal chemotherapy,” said Daniels. “The single, greatest change has been going from telling parents that there is a likelihood that their child will need to have their eye removed, to telling most parents that we can save their child’s eye and also their vision. It’s a profound shift.”

Daniels explains that with more innovative treatments, the retinoblastoma team is also seeing fewer hospitalizations, episodes of low blood counts and blood transfusions as well as less immune suppression in patients treated with IAC as compared to systemic chemotherapy. The effects on the patient have resulted in statistically significant outcomes. These findings from Vanderbilt have led to an international, multi-institutional, NIH-funded study, led by Friedman and Daniels, to compare outcomes in patients treated with IV chemotherapy versus IAC.

In the past, even when patients could be cured of their retinoblastoma, assessing visual acuity was not always a priority. But more emphasis has been placed on measuring vision in this patient population, the team stressed.

“We can now save almost all eyes of children with retinoblastoma. The key is now to save their vision as well,” Daniels said. “Most patients see well enough to read, to drive when they get older, to lead normal visual lives. We emphasize visual rehabilitation after completing cancer treatment, and we see this as an integral part of therapy. That is where the whole team comes in. We have everyone under one roof, which allows us to treat the whole child.”

Friedman and Daniels are joined by neuro-interventionalist Michael Froehler, MD, PhD, who inserts a tiny catheter into the patient’s groin and threads it to the arterial branch leading to the tumor in the eye. He then injects the chemotherapy blend prescribed by Daniels and Friedman. The technique allows for a high concentration of chemotherapy to kill the tumor while limiting the toxic effects on the rest of the body — a typical consequence of systemic chemotherapy.

IAC prevents new retinoblastoma tumor development elsewhere in the eye by killing early cancer cells before they have a chance to grow. That was not the case with systemic chemotherapy, where new tumors would develop as physicians were battling to get the earlier tumors under control.

The endovascular approach, combining up to three different IAC drugs across one or both eyes of an affected child, allows patient-tailored personalized medicine to optimize the effect of the treatment.

Today, Jude’s vision is 20/20 in the right eye and his vision in the left eye improved from 20/250 before IAC to 20/80, with the help of patching for visual rehabilitation, a practice he has done since he was 2 years old.

“Most people don’t even know what Jude has been through. They just know he wears glasses. Jude still doesn’t know that he had cancer,” said Kee. “We try not to make a big deal out of it.

“We regularly talk about how lucky we have been with the course of treatment we chose. We know things could have turned out totally different.”

The innovations that allowed for Vanderbilt to embark on IAC therapy hail back to 1995 when Donahue came to Vanderbilt University Medical Center. He began working on a new technology to detect what causes amblyopia, commonly known as lazy eye, and the leading cause of visual impairment in the United States for the pediatric population.

Amblyopia, which begins during infancy and early childhood, is a vision development disorder in which an eye fails to achieve normal visual acuity, even with prescription eyeglasses or contact lenses. If left untreated, the brain becomes hard-wired and unable to improve vision. By adulthood, the condition is not treatable.

Family’s personal story spurs passion to give back

Rachel White and her husband, Aaron, have always been drawn to ministry that empowers people to want to make a change. Read more »

For Donahue, the Sam and Darthea Coleman Chair of Pediatric Ophthalmology, professor of Pediatrics and Neurology, that was not acceptable. It prompted him to look more closely at the screening practices of young children, which 25 years ago consisted of the traditional method of testing — covering one eye and reading an eye chart.

“The biggest problem with that method is that it took a long time to conduct the testing; most children like to peek, and most children can’t read the eye chart until they are at least 4 or 5 years old.

“This disorder needs to be treated earlier than that because by the time a child reaches age 5, the likelihood of a successful treatment starts to drop,” said Donahue. “The vision in too many children was being missed.”

In the mid-1990s technological advancements produced a mechanism to detect amblyopia which changed the entire landscape, said Donahue.

With a tool in place, Donahue led the way in promoting the need to screen children at a younger age. Using trained members of the Tennessee Lions Eye Clubs, volunteers conducted screenings using hand-held cameras called PhotoScreeners. The black and white photographs were sent back to Vanderbilt for evaluation.

The responses were eye opening.

“We screened about 35,000 children through the Lions Club, which continues to this day. That screening program was used as a model for similar programs being started by Lions Clubs across the nation and worldwide, screening more than 2 million children across the globe,” Donahue said.

These screening advances have led to the early detection of amblyopia and its risk factors, which include cataracts and high and asymmetric refractive errors.

“What started as a volunteer effort with the Lions Clubs has become widely accepted as a standard for pediatricians to screen for vision problems, and that is very exciting,” said Donahue. 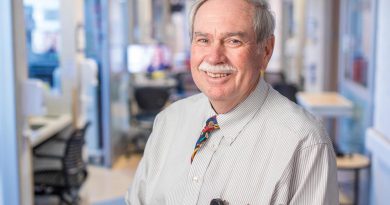 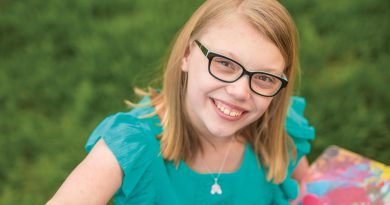 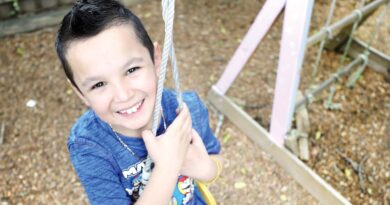