With long, light brown curls framing her chubby chipmunk cheeks, 2-year-old Mollie Orton carefully reached out a pink and white sneakered foot toward the stair step below her.

Even with physical therapist Shirley Gogliotti holding her hand and a crowd of onlookers cheering, Mollie was hesitant to take that big step down. Instead she dropped to her bottom and scooted toward the floor. Despite three more tries and lots of encouragement to use her feet, Mollie was only going down one way, her way, on her bottom. Mollie’s mom, Cassidy Orton, said stubbornness is a hallmark personality trait in her daughter, but she’s so grateful for it. “She’s very sweet and loving but very stubborn, strong-willed and fearless. Mollie is a fighter. She doesn’t give up and adapts well. Whatever gets thrown at her, she takes. She’s beaten the odds and will continue to surprise us all.”

Mollie was born on April 16, 2012, via cesarean section with the umbilical cord wrapped twice around her neck.

She was unresponsive, and the team at Williamson Medical Center worked for 13 minutes to revive her. Anticipating severe brain damage due to the lack of oxygen, they prepped Mollie for cooling therapy (reducing the baby’s body temperature to help prevent brain damage) and called for transport to the Neonatal Intensive Care Unit (NICU) at Monroe Carell Jr. Children’s Hospital at Vanderbilt.

Orton was finally able to follow Mollie to Vanderbilt that evening, and she and her husband were given dire news.

“The doctors said the next 24 hours were critical and she was not likely to make it but they were doing all they could,” she recalled.

There was a second strike against Mollie—the lining of the placenta (responsible for nourishing a growing fetus) was detaching from the uterus. Because of the condition, chronic placental abruption, Mollie was being deprived of oxygen, nutrients and blood that typically transfer across the placenta. She needed multiple blood transfusions, and was diagnosed with neonatal encephalopathy, a syndrome caused by a lack of oxygen at birth. She had anemia and seizures, and had brain damage from so much blood and oxygen loss.

“In the NICU, I honestly didn’t know what would happen. I didn’t know if she would be here. She totally exceeded all expectations. My prayer was that she would have a good quality of life, and it was definitely answered.”

After 24 days in the NICU, she went home to Centerville, Tennessee. Mollie was alive, but now the work began to give her the good quality of life her family had prayed for.

The Neonatal Follow-up Program’s clinic monitors the development of babies who have left the NICU through age 4. Infants who were born preterm, had a traumatic birth or have congenital defects are at a higher risk for developmental delays. The clinic keeps a close eye on these babies and makes recommendations or referrals to the appropriate services.

“Discharge from the NICU shouldn’t be where improvements end. The follow-up clinics extend what we do in the NICU into the first years of life and sets these children up for a lifetime of success,” said Susan Guttentag, M.D., director of the Division of Neonatology, and Julia Carell Stadler Professor of Pediatrics.

Susan H. Guttentag, M.D., joined Vanderbilt University in February as the new director of the Division of Neonatology within the Department of Pediatrics at Monroe Carell Jr. Children’s Hospital at Vanderbilt. Read more »

From birth to 12 months at the Children’s Hospital Clinic location, the focus is on transitioning to home and on growth and nutrition. From 1 to 4 years at the One Hundred Oaks Clinic, the focus is on the child’s development in motor and cognitive skills.

“All NICU kids are at an increased risk for delays, autism, cerebral palsy, attention deficit hyperactivity disorder, learning difficulties and behavioral issues. If we suspect something is wrong, we’re going to test for it and figure out what it is,” said Nathalie Maitre, M.D., Ph.D., assistant professor of Pediatrics and director of the NICU Follow-up Program.

The emphasis is on intervening early to give these children the best chance to overcome their impairments.

“The return on investment with early childhood development and rehabilitation is huge. By restoring function and helping families help their own children, we are investing in the future of these NICU graduates,” Maitre said.

“Babies’ brains are so able to learn and change, and different areas of the brain can sometimes compensate for damage in other areas. Our goal is to prevent long-term morbidities. If they’re fitted with orthotics as a child, they might not end up in a wheelchair as a teen. If they get speech therapy at age 2, they may start school at the same level as their peers.”

The Neonatal Follow-up Program at Vanderbilt monitors the early growth and development of infants and toddlers after they leave the NICU. Read more »

The follow-up clinics have a slate of 13 dedicated health care providers, with fellows, residents and students constantly on rotations.

Vanderbilt’s NICU is the only one in Nashville with an associated follow-up program, and the only one in Tennessee with special programs for congenital heart disease and spina bifida and neural tube defects.

The follow-up clinics serve a wide radius, including Knoxville, Jackson, Chattanooga and Clarksville. They have more than 1,200 yearly visits and diagnose more than 50 children each year with severe impairments, such as cerebral palsy and vision and hearing loss. Many more have delays and less severe impairments.

Yet the program is always fighting for funding.

“Rehab and developmental care are poorly reimbursed by insurance, and primary care pediatricians just can’t afford to provide the lengthy and comprehensive visits for developmental care. Every year it is a fight, and we’re scared it won’t get funded again and that we won’t find a way to stretch the budget,” Maitre said.

The program depends on a grant from the Junior League of Nashville and funding from the Tennessee government. Originally removed from the state budget, Gov. Bill Haslam reinstated this important source of funding earlier this year.

The Follow-up Program is also committed to research to advance the field and has at least three studies underway at any time.

“We’re mostly looking at the consequences of the NICU stay and what we could do differently. We don’t just document outcomes in the patients we see. We want to do something about it and help the children in the NICU now,” Maitre said.

The clinics have a new way to diagnose cerebral palsy as early as age 1 in preterm infants, instead of the usual age 2 or 3, allowing for earlier intervention. Research is also underway related to sensory processing disorders and motor skills after massive brain bleeds. Studies are noninvasive, using brainwaves or saliva as a testing source instead of blood, reducing the number of needle sticks.

“The research and care we provide is not just important, it’s our responsibility,” Maitre said. “What’s the point of making all these advances to save babies in the NICU if we don’t make sure they are OK once they leave?

“A great outcome is when the family and child grow together, happy and healthy. It doesn’t necessarily mean that there are no impairments. But we need to know we’ve helped them overcome those and recover some function.”

‘Getting all the things she needs’

After she left the NICU, Mollie had a full slate of health care appointments. She was followed by Neurology until she was cleared of seizures. She had a feeding tube until she turned 1, and has frequent visits for physical, occupational and speech therapy. She has moderate hearing loss and now wears hearing aids and attends the Mama Lere Hearing School at Vanderbilt twice a week.

“Her talking is good now and cognitively she scores in the normal range. She’s still clumsy. Crawling up on the couch is hard and she’s not pedaling her tricycle. She can run, but not as fast or as gracefully as other 2-year-olds. But overall Mollie has done everything they didn’t think she would do,” Orton said.

One of the best things for Mollie was having her older sister Gracie.

“Gracie is such a good role model for Mollie. Mollie looks up to her and wants to do what she is doing. It’s like an in-home therapist,” Orton said.

Mollie was back in the Follow-up Clinic for her 2-year-old visit in May, and started her appointment with Kristen Reeslund, Ph.D., an expert in developmental and behavioral psychology. Reeslund administered the Bayley Scales of Infant and Toddler Development, a test that assessed Mollie’s cognitive development through puzzles and problem solving. She also observed her understanding and production of language, and fine and gross motor skills.

“We do this at their 2- and 3-year-old visits, then if we find delays we can get them in with speech, OT and PT. Once the interventions are in place, we can see how they’re improving,” Reeslund said.

“The earlier we can intervene while the brain is malleable, the more we can see improvements. A lot of kids don’t get noticed until they’re in school, but those are years that we could have been doing something.”

Reeslund has Mollie do things like stack blocks and try to fit them all in a teacup, find a bracelet hidden under a washcloth and mimic lines and circles drawn with a crayon. Then it’s out to the hallway where physical therapist Shirley Gogliotti joins to watch Mollie run and jump and navigate the stairs. Mollie wears AFOs (ankle-foot orthotics), and they evaluate her gait with and without the braces.

Lisa Gracey shares a puppet of an orange bear with 11-month-old son Duke, singing ‘Old MacDonald had a farm,’ encouraging him to be engaged in his music therapy class. Read more »

Then it’s on to a physician visit with Alice Lawrence, M.D., assistant professor of Pediatrics, to go over all the test results and discuss Mollie’s progress. Mollie is doing very well cognitively, but Lawrence suspects she may have very mild cerebral palsy, a neurological condition that can affect movement, muscle tone, hearing, seeing, learning and posture. Lawrence refers Mollie to occupational therapy (OT) for further evaluation.

“I thought Dr. Lawrence was very thorough and on top of things. I liked that she had the PT background and suggested more therapy,” Orton said.

“That’s why we’re here—they’re looking at her development and making sure Mollie is getting all the things she needs. I want to get her all that she needs when she’s little, not look back and wish we had done more for her.” 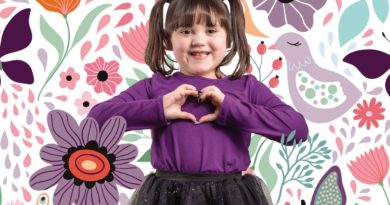 January 28, 2013 Christina Echegaray Comments Off on Faith, Family and Facebook 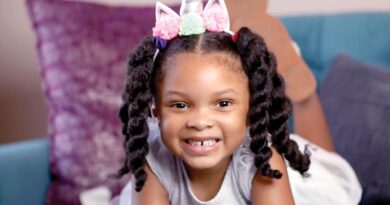