A Monroe Carell Jr. Children’s Hospital study showed that a mother’s voice can be a powerful healer for babies in the neonatal intensive care unit (NICU).

Premature babies who receive an interventional therapy combining their mother’s voice and a pacifier-activated music player learn to eat more efficiently and have their feeding tubes removed sooner than other preemies, according to research published in February in the journal Pediatrics.

“A mother’s voice is a powerful auditory cue,” said study author Nathalie Maitre, M.D., Ph.D., assistant professor of Pediatrics. “Babies know and love their mother’s voice. It has proven to be the perfect incentive to help motivate these babies.”

The randomized clinical trial tested 94 premature babies, pairing their mother’s voice singing a lullaby with a pacifier-activated music player. The participating babies received the intervention for 15 minutes a day for five days in a row. When they sucked correctly on their pacifier, a special device with sensors and speakers, they were rewarded by hearing their mother singing a lullaby. If they stopped sucking, the music would stop.

The lullabies selected were chosen with care. The melodies had to be simple, repetitive and within one octave range. Anything more complex could be too much for a premature baby’s developing brain. The songs were then recorded and connected to the pacifier-activated music player.

“The mothers were enthusiastic to join the study,” Chorna said. “Some of the mothers were nervous to sing, but we found they were really grateful to be able to do something to help their babies.”

Doctors didn’t question whether Deborah Locke’s son would come early; it was only a matter of how early he would come. Her son, Chazon King, was born three months early at 1 pound, 8 ounces. Locke says that the study has given her hope.

“I noticed right away, that after his therapy sessions, Chazon’s breathing and sucking would get a little better each time. Everyone has been so amazed at how well he is now doing,” Locke said.

“He can’t really see me yet because his vision has not developed enough, but he can hear me. Singing to him is something that I can do to comfort him and let him know that I’m here.”

Maitre and Chorna analyzed the data with the help of James C. Slaughter, Dr.P.H., assistant professor of Biostatistics. The study shows babies who receive the pacifier intervention were able to have their feeding tubes removed about a week earlier than babies who did not receive the intervention. In addition, the results show clear evidence babies ate more frequently and developed a stronger sucking ability, and did not show signs of stress during their pacifier sessions. They also appeared to have shorter hospitalizations.

“The benefits are both medical and emotional as this is a unique way for parents to directly help their children learn a skill crucial to their growth and development,” Maitre said. “It gives parents a small amount of control to improve their baby’s medical course, in addition to giving them a bonding experience which will last throughout childhood.”

June 23, 2015 user Comments Off on Rising Above Cancer 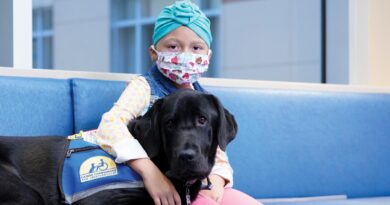 January 27, 2021 Christina Echegaray Comments Off on Pawtner in Care