Vanderbilt University Medical Center (VUMC) made history in 1997 when two surgeons pioneered fetal surgery to treat spina bifida, or myelomeningocele, the most common birth defect in the central nervous system.

Almost two decades later, armed with overwhelming evidence from a seven-year study that confirms the effectiveness of the complicated surgery, and with more than 300 cases already performed at Vanderbilt, the institution made history again when a team traveled to Australia last year to help launch that country’s first-ever fetal surgery program for spina bifida and guide the first surgery.

“We are very collegial and as an academic medical center we believe in that collegial spirit,” said Bennett, director of the Division of Maternal-Fetal Medicine. “Surgery has been always taught with the idea of mentorship. To describe something to someone is one thing, while to be at the table with them is another. We could tell the (Australia team) how to do a procedure, but to work with them at the table was really superior,” Bennett said. “At the end of the day, we were able to provide a critical surgery to a baby who desperately needed it and will have a better life as a result. It was a very rewarding experience.”

That collegial spirit also would have been what the late Noel Tulipan, M.D., former chief of Pediatric Neurosurgery at Vanderbilt, would have wanted. Tulipan, who died in late 2015, paved the way, led the research and helped pioneer the first fetal surgery for spina bifida in the 1990s, along with Joseph Bruner, M.D. Tulipan believed in collaborating to do what was best for families.

“Noel’s and the Vanderbilt group’s view was ‘sure, come on down, and we’ll take you to dinner too,’” said Wellons. “We’ve taken the Vanderbilt experience gained over time and we’ve imparted it to another part of the world. Research clearly shows the surgery helps outcomes. There is no doubt that every part of the world needs this as a surgical option for their patients. Glenn (Gardener, M.D.) and his team (in Brisbane) worked hard to make this happen. For us to be asked to be a part of this was a tremendous honor.”

In spina bifida, the layers of tissue and bone that normally cover and protect the spinal cord fail to close during development, leaving delicate nerves exposed to the intrauterine environment.

Children often suffer severe disabilities, including paralysis below the waist and lifelong bladder and bowel problems. Nearly 90 percent of children with this disorder develop hydrocephalus, a fluid build-up within the brain, which requires surgical placement of a shunt to drain fluid. A shunt, while necessary to save a child’s life, can impact intellectual development. Surgery in utero closes the “myelo” to reduce the likelihood of shunt placement and to improve the chances of walking.

The Vanderbilt team knew when the Brisbane hospital asked for help in launching a program, it was important to help make this surgery available to families in a part of the world where it hadn’t been established. Following a long trip, the team members went to a specially convened meeting with Australia’s medical licensing board to get temporary permission to operate.

Mater and Vanderbilt team members evaluated the two candidates for the surgery, and due to the findings of an updated ultrasound, had the difficult job of telling one family they did not meet criteria for a successful surgery. The day before the surgery for the other family, the teams performed a simulation of the procedure as a dress rehearsal. This brought together more than 45 members of the Australian and Vanderbilt teams in order to work through the next day’s procedure.

The surgery was successful, with the Vanderbilt team guiding their Mater counterparts. 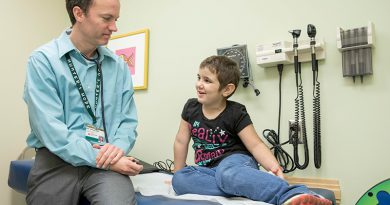 What is cooling therapy?

June 6, 2019 Christina Echegaray Comments Off on What is cooling therapy?