Adults have calendar applications on their digital devices to remind them of appointments and what’s next on their agenda of tasks. Now children, who function well with schedules and routines for tasks, have a new Vanderbilt-created app for that.

The iPad app, called MyRoutine, allows parents and providers to create visual stories to let children know what to expect during their daily schedule, helping to reduce anxieties and provide structure. A doctor’s appointment or routines like bedtime can be turned into a series of tasks, using the iPad’s camera to take photos or video of each step. The app is available in iTunes for the iPad.

MyRoutine was created for medical providers and families in collaboration with developmental medicine specialists at the Monroe Carell Jr. Children’s Hospital at Vanderbilt. The Center for Child Development plans to use the app in clinic for patient appointments.

Prescribing “atypical” antipsychotic medications to children and young adults with behavioral problems or mood disorders may put them at unnecessary risk for type 2 diabetes, according to researchers at Vanderbilt University and Mayo Clinic, along with colleagues at other institutions.

Young people using medications like risperidone, quetiapine, aripiprazol and olanzapine led to a threefold increased risk of developing type 2 diabetes within the first year of taking the drug, according to the study published in the journal JAMA Psychiatry.

While other studies have shown an increased risk for type 2 diabetes associated with the use atypical antipsychotic medications, this is the first large, well-designed study to look at the risk in children, said Wayne A. Ray, Ph.D., professor of Preventive Medicine at Vanderbilt, and senior author of the study. The authors note the use of these drugs for non-psychosis-related mood, attention or behavioral disorders in youth/children now accounts for the majority of prescriptions.

State-provided, de-identified medical records were examined for TennCare youths ages 6-24 from 1996 through 2007. During that time, children and youth who were prescribed treatment with atypical antipsychotics for attention, behavioral or mood disorders were compared with similar youth prescribed approved medications for those disorders. Even with the further elimination of certain disorders that are commonly associated with diabetes, like polycystic ovarian syndrome, those taking antipsychotics had triple the risk of developing type 2 diabetes in the following year, with the risk increasing further as cumulative dosages increased. The increased risk persisted for at least a year after the medications were stopped.

Ray, William V. Bobo, M.D., MPH, from Mayo Clinic and first author of the study, and colleagues point out that developing type 2 diabetes is still rare in this age group. Of the nearly 29,000 children and youth in the antipsychotic medication group and 14,400 children in the control group, 106 were ultimately diagnosed and treated for type 2 diabetes.

Lisa Young, M.D., associate professor of Pediatrics and Medicine and Cell Biology, has been awarded a five-year, $1.9 million National Institutes of Health grant to study what causes cellular dysfunction and pulmonary fibrosis in patients with Hermansky-Pudlak syndrome (HPS).

HPS is an inherited disorder which causes albinism, decreased visual acuity, susceptibility to bleeding due to platelet dysfunction, and fatal pulmonary fibrosis.

Young’s approach is to leverage the known genetic basis of this rare disease as a strategy to gain insight into critical mechanisms and pathways relevant to more common forms of pulmonary fibrosis. Currently, there are no effective treatments for pulmonary fibrosis, a condition in which there is progressive scarring in the lungs leading to shortness of breath and respiratory failure.

“The specific focus of my laboratory is on the roles of alveolar epithelial cells and alveolar macrophages in the pathogenesis of pulmonary fibrosis (scarring),” she said.

Young’s laboratory plans to use mouse models to study the roles of alveolar epithelial cells and alveolar macrophages in order to understand what causes pulmonary fibrosis in HPS and how new therapies might be developed.

Summer months are typically a time of slowing down and relaxing.

June 23, 2015 user Comments Off on Summer months are typically a time of slowing down and relaxing.

June 23, 2015 user Comments Off on Rising Above Cancer 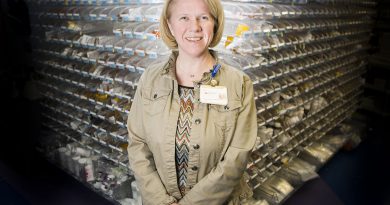 June 13, 2018 Christina Echegaray Comments Off on Pioneers of Hope