A picture of 2-year-old Bridget sits on the desk of Howard Katzenstein, M.D. One of his first patients, she had a less than 10 percent chance of surviving the cancer she was battling.

Katzenstein says Bridget, now a freshman in high school, is alive but has side effects, speaking of the unavoidable complications from the treatments that ultimately saved her life.

Photos of other former patients, now pediatric cancer survivors, also adorn his office, all serving as reminders of why he does the job, he said.

The “job” is research that will provide answers for future generations of cancer survivors.

“We know overall that we cure about 80 percent of pediatric cancer patients, so we need to worry about how they are going to be years from now,” said Katzenstein, professor of Pediatrics and medical director for Pediatric Hematology Oncology. “Will they have children? Will they be able to exercise normally? What kind of jobs will they be able to have? How are their organs going to work? We call that survivorship.”

Olympic gold medalist Scott Hamilton is no stranger to survivorship. The 55-year-old figure skating champion, husband to Tracie and father of two sons, ages 9 and 5, fought and won Stage III testicular cancer in 1997.

Since that time, Hamilton has been a tireless advocate for cancer treatment and research and says everyone can play a part in finding new treatments for cancer, be it through fundraising walks or helping a sick neighbor with a meal.

“We all have a role to play in creating the next miracle,” Hamilton said.

The Hamiltons, who live in nearby Franklin, Tenn., have pursued their next initiative in the quest for greater cancer treatment options by funding the Scott and Tracie Hamilton Chair in Cancer Survivorship at the Monroe Carell Jr. Children’s Hospital at Vanderbilt, which Katzenstein now holds.

“We realized this could be a really wonderful opportunity to create groundbreaking research that will be shared throughout the cancer community so that children will be treated in a unique way in the future, hopefully with the thought of survivorship as part of their treatment,” Hamilton said. “We’re excited to help facilitate a new direction in the way we care for children by recruiting a new doctor that will have specific research in survivorship.”

Katzenstein comes to Vanderbilt after holding numerous leadership positions at Children’s Health Care of Atlanta, including director of their Innovative Therapy Program.

Through this newly endowed chair position, Katzenstein will continue his research on innovative therapies that he hopes will not only cure more patients but provide new ways for curing the patient with fewer side effects.

“In these challenging economic times, national support for pediatric research is limited, so without support like [the Hamiltons’], we can’t do what we need to do, and our kids don’t deserve that and their families don’t deserve that either,” Katzenstein said.

“My goal is to continue to give the best possible care here, but I think it’s not enough to take care of the patients. When I’m at the end of my career, I want to have learned something from each patient and have contributed to something that could lead to new and better treatments.”

He was a successful, self-made businessman, and she was a pioneering nurse, but the many professional accomplishments of Nancy and Hilliard Travis were eclipsed only by their ongoing generosity to the community, especially their beloved Vanderbilt.

The most recent example is a generous gift to the Vanderbilt University School of Nursing for student scholarships, and to the Monroe Carell Jr. Children’s Hospital at Vanderbilt for ongoing research, both areas designated by the Travises themselves, through a bequest from their estate. The gift not only gives permanence to their legacy and dedication to Vanderbilt, it provides a significant boost to scholarship support and research in children’s health, impacting students, patients, families and society on a global level.

“Mr. and Mrs. Travis have left an indelible mark on Vanderbilt and on Nashville, continually giving of their time and financial support throughout their lives and now as part of their legacy,” said Jeff Balser, M.D., Ph.D., vice chancellor for Health Affairs and dean of the Vanderbilt University School of Medicine. “Lasting results of their generosity will provide for two noble missions; to train nursing leaders and to provide the funds necessary for our researchers to unravel the mysteries surrounding serious childhood diseases.”

Hilliard Travis led Travis Electric, the family business that started in the 1950s, and he and his brothers became the first franchisees for a new restaurant called Shoney’s in East Tennessee, which quickly grew.

In the early 1960s Nancy, a 1947 graduate of Vanderbilt University School of Nursing, volunteered at Vanderbilt, dressing up as the clown “Sweet Pea” to entertain children.

Their adopted granddaughter Mayeti Gametchu said they were “really amazing people who were so much more than financial support.”

Hilliard Travis died in 1996 and Nancy in 2012, but their ongoing commitment to research, education and their community—and their unwavering dedication to those things that were most important to them—will be long remembered.

Nashville’s debutante ball, The Eve of Janus, is Children’s Hospital’s longest running fundraising event. Over 43 years, the Nashville alumnae chapter of Delta Delta Delta has given more than $4 million in support of the Tri Delta Pediatric Hematology Oncology Clinic and the Tri Delta Pediatric Hematology/Oncology Research Endowment at Children’s Hospital.

The Eve of Janus, held at the Schermerhorn Symphony Center, presents a group of outstanding young women and men right after their first year of college to the Nashville community. In addition to their presentation they tour Monroe Carell Jr. Children’s Hospital at Vanderbilt and bring DVDs for Children’s Hospital’s media library. A Vanderbilt cancer patient serves as an honorary chair each year for the event.

“We’re trying to develop the next generation of philanthropists and connect the participants to the mission of the event,” said Carroll Kimball, who with Jane Jackson, served as advisory board chair for the 2013 Eve of Janus, held July 27.

December 19, 2011 durend Comments Off on Shape the Future

It seems like just yesterday that we were moving patients…

January 27, 2015 user Comments Off on It seems like just yesterday that we were moving patients… 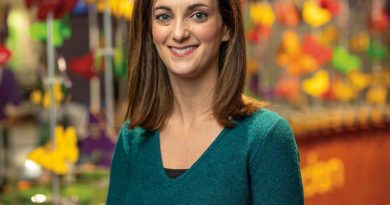