Vanderbilt-led research, as part of an international, multi-center trial, found regular blood transfusion therapy significantly reduces the recurrence of silent strokes and strokes in children with sickle cell anemia who have had pre-existing silent strokes, according to results published in the New England Journal of Medicine (NEJM).

Michael R. DeBaun, M.D., MPH, director of the Vanderbilt-Meharry Sickle Cell Disease Center of Excellence, professor of Pediatrics, and J.C. Peterson M.D. Professor of Pediatric Pulmonology, was the principal investigator of the more than $20 million, federally funded trial, the largest of its kind in children with sickle cell. The 10-year trial involved 29 clinic centers in the United States, France, Canada and the United Kingdom.

Nearly 100,000 people in the United States are living with sickle cell disease, a group of inherited blood disorders. Sickle cell disease most commonly affects African-Americans, occurring in one of every 396 births in this ethnic group. In patients with the disease, red blood cells are abnormal—hard, sticky and shaped like a crescent moon. When the sickle cells travel through small blood vessels, they can decrease the normal blood flow to all organs of the body, causing many complications that require hospitalization for treatment, lung disease and a shortened life span.

Silent strokes are frequent in sickle cell anemia (the most common form of sickle cell disease), occurring in approximately 30 percent of school-age children with the disease, and can cause poor school performance and limit performance of complex tasks. The only way to diagnose a silent stroke is with magnetic resonance imaging (MRI) of the brain. Once a child has had a silent stroke, he is at a much higher risk for more dangerous overt strokes and new or enlarged silent stokes.

Participants in the single-blind study included 196 children, between ages 5 and 15, who had no history of stroke, but had one or more silent strokes confirmed by MRI.

Given the positive findings of the study, DeBaun and other authors of the study recommend that children with sickle cell anemia have a surveillance MRI, preferably without sedation, by the beginning of elementary school. Most children with the disease who are at risk for a silent stroke will have one by age 6.

Additionally, the study notes health care providers should discuss treatment options with families to determine if transfusion therapy is appropriate when a silent stroke is detected.

DeBaun’s clinical and research programs receive support from the Junior League of Nashville. 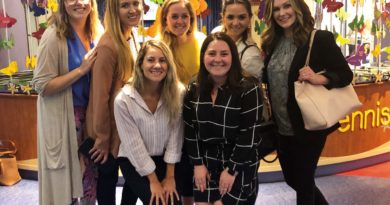 Stuffed animals bring bacteria to OR

June 23, 2015 user Comments Off on Stuffed animals bring bacteria to OR