Before February 2012, Christy Page Hagewood’s Facebook page was a mash of fun in the sun, family bowling, awards her three girls received and math competitions. Posts were random, spontaneous and carefree. Christy and Keith Hagewood were living in White House, Tenn., with their daughters, the oldest, 14, and twin girls, 10, when they learned in June 2011 their family was about to get bigger. Christy was pregnant. Over the next year and half, Christy’s posts about love, family and faith would become a family journal chronicling their days at Monroe Carell Jr. Children’s Hospital at Vanderbilt. They would use the social networking service to update friends, family and people from the United States to Thailand and beyond on the ups and downs of their fourth child — the first boy, Andrew Preston Hagewood. With their permission, we have used portions of their Facebook posts, to retell their story.

When Christy and Keith learned they were having another child, Christy, a registered nurse, was working as a computer  systems analyst at Vanderbilt-Ingram Cancer Center. Keith,  whose nickname is Red for his ginger hair, worked as a leasing agent for tractor trailers. They had been married 17 years. The  announcement of the newest addition to their family came in the form of an ultrasound photo posted on Facebook on June 30, 2011. Elated friends and family commented that it must be a boy. They were right.

Ten years had passed since twins Amanda and Natalie were born. As her scheduled due date drew closer, Christy joked how much parenting tips had changed. She posted random thoughts to pass the time before Andrew was born Feb. 6.

Maria Lynn Hagewood (above) is Christy and Keith’s 14-year-old daughter. The update that followed was posted by Keith Hagewood who noted a stirring change of events over 12 hours after Andrew was born at Nashville’s Baptist Hospital. Little did Keith know he’d become the regular composer of Facebook updates for months to come.

Just days after birth, Andrew was placed on a heart/lung machine, called Extracorporeal Membrane Oxygenation (ECMO), which did the work his heart could not – pump blood around his tiny body. He had been born with Hypotrophic Cardiomyopathy, thickening of the heart muscle. Doctors put him on a waiting list for a heart transplant – an average wait of six to eight weeks.

The Hagewoods posted twice daily. Greetings began with a Good morning, good afternoon or good evening. As the post count grew, so did their Facebook “friends.” Maria, the oldest daughter, used a United States map to mark off every place where someone was praying for Andrew.

The family received prayers via email, letters and social media from all 50 states and dozens of other countries, including Argentina, Jerusalem, Philippines, Paraguay and Thailand. Many family members – immediate and extended – such as Melissa Hagewood Davis and Ruby Light Davis offered words of comfort and support. Strangers halfway around the world did as well.

Keith and Christy would often cross paths in cyberspace – sometimes in a playful attempt to post before the other. On Valentine’s Day, they sent each other love on Christy’s page an hour apart. They tried hard to maintain a semblance of normalcy, especially for their girls.

Christy’s Facebook page quickly reached more than 1,700 “friends.” Local media outlets aired segments on Andrew. His parents shared his story to raise awareness about organ donation. They encouraged people to register as a donor, not just for Andrew’s sake, but for all patients waiting for transplants. Then the day came….

The Hagewoods didn’t miss a beat, ensuring their Facebook friends were always informed. In the ensuing months post-transplant, Andrew endured various trials and tribulations. He had poor kidney function for a bit; his blood pressure saw highs and lows; his lung collapsed several times; his body had retained too much fluid, which wasn’t draining as doctors hoped.

While Andrew was in the hospital, the twins celebrated their 11th birthday, Maria turned 15, and the Hagewoods celebrated 18 years of marriage. They shared each moment, with their Facebook community.

In August, Andrew was finally well enough to be moved from the intensive care unit to a general pediatrics floor, and one step closer to home.

After several more weeks of hurdles, physical therapy and recovering, the Hagewoods received the news they had waited for since the day Andrew was born – he could finally go home.

In addition to sharing Andrew Hagewood’s story, his parents Keith and Christy set out to raise awareness about organ donation – not just for Andrew, but for all children waiting for a transplant. For more information or to sign up to be a registered donor, contact: Tennessee Donor Services (888) 234-4440, tds.dcids.org; Donate Life America (804) 377-3580, donatelife.net; United Network for Organ Sharing (UNOS) (888) 894-6361, unos.org

Editor’s Update: Andrew had to return to the hospital several days after being home with his family and remained there at press time for breathing difficulties. He still faces hurdles and some respiratory issues, but his family hopes to have him home soon. 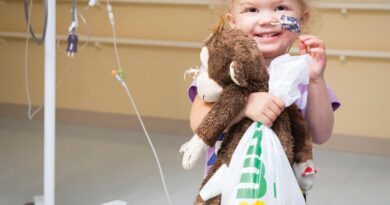 January 27, 2021 Christina Echegaray Comments Off on Friends Press On