Andrew Preston Hagewood, now 11 months, had many ‘firsts’ at Monroe Carell Jr. Children’s Hospital at Vanderbilt. His first bath, the first time on his tummy, his first pacifier, his first tooth. But it was two other firsts he accomplished that made him unique at Vanderbilt.

Until the transplant, Andrew spent seven weeks on Extracorporeal Membrane Oxygenation (ECMO). The heart support machine did the work his heart could not – pump blood around his body.

Andrew set a record at Vanderbilt for most time spent on ECMO – 50 days. ECMO has been used for infants and children at Vanderbilt since 1989. Andrew, whose lungs were healthy, also was the first Vanderbilt patient on ECMO without a breathing tube, made possible by Brett A. Mettler, M.D., director of Pediatric Cardiac Transplantation.
Typically, infants only can be on ECMO for about two to three weeks because risks increase for kidney failure, stroke and other infections. They also are often sedated and on a ventilator. The average wait for a heart transplant is six to eight weeks and longer for newborns.

“Babies who stay on the ventilator too long sustain lung damage,” said Mettler. “We decided to put him on ECMO with the goal, if we could, to extubate him.”

Awake and breathing on his own, Andrew could interact with his family, watch his twin sisters sing to him over video phone and be held by his parents.

“The more dramatic news about this is how well Andrew had done for so long with the team running ECMO,” said David Bichell, M.D., chief of Pediatric Cardiac Surgery. “It’s a tribute to the team. The pressure is on once you’re on ECMO and the clock is ticking.”

Andrew, during his months at Children’s Hospital, has had many hurdles, but is progressing with a new healthy heart.
“His heart looks great. He’s been thriving from a heart standpoint,” said Mettler. 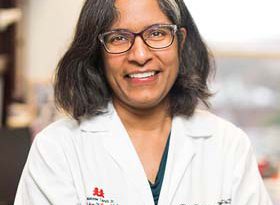 The cheers must go on