Up until the day Aubree Vanzant was diagnosed with autoimmune hepatitis in May 2015, the 11-year-old was turning cartwheels, doing round-offs, playing touch football and riding her bike.

Outside of having a yellowish tint to her skin she was being a typical kid, her mother recalled.

“The day they told me she was in end-stage liver failure, I was completely shocked,” said Nikole Sellers, Aubree’s mom. “I told them about all her activity the days before and one of the doctors looked at me and said, ‘Somebody was surely looking out for her.’

“They told me that everything I was describing that Aubree had been doing could have killed her. She had portal hypertension and any wrong movement or hits to the stomach could have caused her to bleed out internally.

“I was terrified. The first thing I remember asking her doctor was if my baby was going to die.”

She spent two weeks in the hospital and two additional weeks recuperating in a nearby hotel before heading back home.

Now a year later, Aubree has experienced two bouts of mild rejection—something her physicians say is more common in patients with autoimmune hepatitis because the immune system is hyperactive.

“There have been a few stressful moments,” admitted Sellers. “But everything has worked out just fine. We are just so glad she is healthy.”

“Because of the risk of infection and rejection are highest in the first six months post transplantation, we really stress the importance of keeping all appointments and following a strict medication regime.

“Our team helps our patients and families navigate life post-transplant. This is an entirely new arena for them and we want to do our best to provide support and encouragement as they embark on this journey.

“It’s a collaborative effort,” said Hanto. “We are committed to ensuring that children have as normal a childhood as they can and live long, healthy adult lives.”

Sellers prays for the same.

“Transplant is not a cure for Aubree’s autoimmune hepatitis,” said Sellers. “It’s a part of the treatment. We just have to wait and see if her body accepts her new liver long term.”

Aubree has no restrictions on her activity— she is free to turn as many cartwheels and play as much touch football as her heart desires.

“And swim,” Aubree quietly adds. “I want to do a lot of swimming this summer.”

June 13, 2018 Christina Echegaray Comments Off on Cancer immunotherapy gets personal 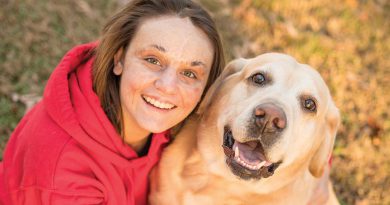