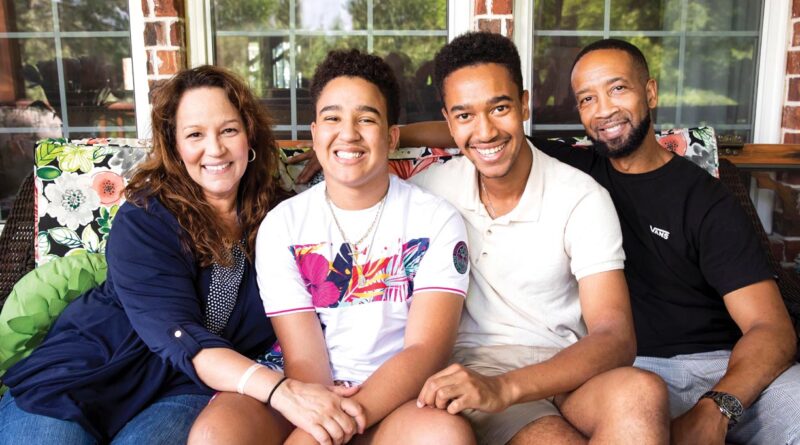 A year ago, Jordan Johnson, pictured second from left, underwent a complex eight-hour brain surgery. Today, he reflects with his parents, Ivette and Jeff, and his older brother, Jalen, on how far he’s come. Photo by Susan Urmy.
Spotlight
August 30, 2021September 27, 2021 Paige Turner

When 15-year-old Jordan Johnson was struck by a ball during his baseball game in June 2020, he never imagined the hit would end up saving his life.

After the injury, Jordan’s parents, Jeff and Ivette, took him to Monroe Carell Jr. Children’s Hospital at Vanderbilt to make sure everything was OK. They were shocked when a scan revealed that Jordan had a giant cerebral cavernous malformation, an abnormality of blood vessels inside his brain stem. The lesion had likely been there since birth, gradually growing over time. By the time Jordan suffered the hit, the lesion had reached a critical size. The options were to continue to let it grow, with the possibility of life-threatening rupture, or to remove it with a high-risk surgery.

Immediately, the Johnsons began exploring the best programs in the country. After much research and prayer, they decided that the neurosurgery team at Children’s Hospital, led by Jay Wellons III, MD, MSPH, was the right choice.

The Johnsons scheduled the procedure for July 21, 2020, as “21” is the number Jordan wears on his baseball uniform.

“We were just a typical family with a typical life,” said Jordan’s dad, Jeff. “Our lives consisted of travel ball, school band performances and family vacations to Disney World. We would never have believed that our son would ever have to have brain surgery.”

After spending two weeks recovering in the hospital following the eight-hour surgery, Jordan began his journey to rehabilitation. He would have to relearn everything, from how to eat to how to walk. Because the lesion was inside the brain stem, a major concern was Jordan’s ability to move and communicate. His parents say their biggest questions were, “Are we going to get our Jordan back? The Jordan he was before surgery?”

Because Tennessee does not have a pediatric inpatient rehabilitation facility, many young patients must travel out of state for this critical service. Due to Jordan’s age and size, fortunately, he was eligible to stay at Vanderbilt Stallworth Rehabilitation Hospital for adults.

Throughout the healing process, Jordan grew especially close to his surgeon, Wellons.

“Jordan is an inspiring young man,” said Wellons, chief of the Division of Pediatric Neurosurgery. “He has handled a very challenging diagnosis and recovery with grit and determination. His parents and his older brother, Jalen, have been incredible advocates for him during every aspect of his care. When the opportunity came for my own son, Jack, to meet him, I jumped on it. To no surprise at all, Jordan had a profound impact on him too.”

Wellons’ connection with and commitment to care for patients like Jordan has not gone unnoticed. For his work, Wellons was awarded the inaugural Cal Turner Chair in Pediatric Neurosurgery in 2020. The new endowed chair was generously funded by Cal Turner Jr. and his late wife, Margaret, who together with their family have long been committed to the mission of Children’s Hospital.

“The gift from Cal Turner Jr. and Margaret supporting Pediatric Neurosurgery is but one example of the generosity of the Turner family improving lives. Dr. Wellons’ expertise and human touch are shining examples of our mission to personalize health care, and it’s fitting that he is the inaugural holder of this chair. It’s a phenomenal recognition of his impact on his patients and their families,” said Jeff Balser, MD, PhD, President and Chief Executive Officer for VUMC and Dean of Vanderbilt University School of Medicine.

In addition to the new endowed chair, the Turner and Dugas family, including Judy and Steve Turner and Laura Jo Dugas and the late Wayne Dugas, supports a variety of programs and expansions at Children’s Hospital, such as the telemedicine initiative that connects care to children in rural communities.

And while the Turners have a longstanding connection with the Medical Center, they also have a deep-rooted relationship with Wellons.

Cal Turner Jr. and Margaret were close friends of Wellons’ late parents, and the families have many fond memories together. When Wellons moved to Nashville, he reconnected with Turner, and he says it has been a joy to build that relationship.

“What a gift it has been for me to have Cal and these wonderful stories of my parents and our families’ history together. I miss them both very much, and so many times I’ve wanted to ask their opinion or tell them a story about my own journey,” said Wellons. “This bond with Cal has been such an important relationship to me. He has a great deal of wisdom, and I am definitely in need of that! Being awarded the chair was such a wonderful surprise, as I cannot imagine a more meaningful name to my family.”

The opportunity to reconnect has been equally significant to Turner.

“I am so honored to have a small part in the medical ministry of Dr. Jay Wellons. He embodies everything that a great physician should be,” said Turner. “Our family always identified Nashville as our city and Vanderbilt as our medical center, and they always served us well. It is a great privilege to give back to an institution that has blessed us and will continue to bless others in the future.”

This new gift will help Children’s Hospital continue to serve as a hub for excellence in diagnosis and treatment for children like Jordan.

Now a year out from surgery, Jordan is home and receiving outpatient physical therapy. He is rating a 37 out of 56 on the Berg Balance Scale, a clinical test for balance, a vast improvement from his post-surgery rating of nine.

“I think I’m doing great because after surgery, I couldn’t even brush my teeth, and now, I can solve my Rubik’s cube,” said Jordan. “My goal is to walk on my own and play sports again, and I know that with hard work, I can do anything.”

Today, Jordan loves playing the saxophone and hanging out with his friends. Together with his family, he even shares his story to raise funds and awareness for rehabilitation efforts at Children’s Hospital.

“We are so thankful that we had this world-class hospital and surgeon right in our backyard,” said Jordan’s mom, Ivette. “Because of that, we have our Jordan back. We were recently able to celebrate his 16th birthday, and we’ll get to watch him graduate, go to college and be whatever he wants to be.”

Visit ChildrensHospitalVanderbilt.org/give to make a difference for more patients like Jordan. 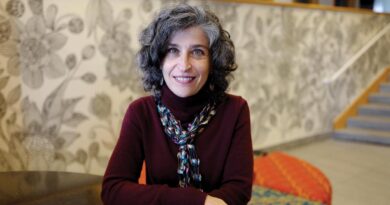 March 17, 2022 Christina Echegaray Comments Off on Connection and Community 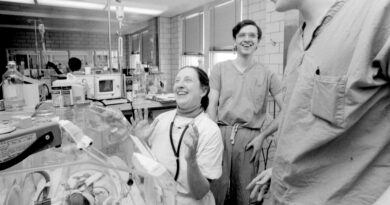 November 11, 2022 Bill Snyder Comments Off on A Legacy Lived