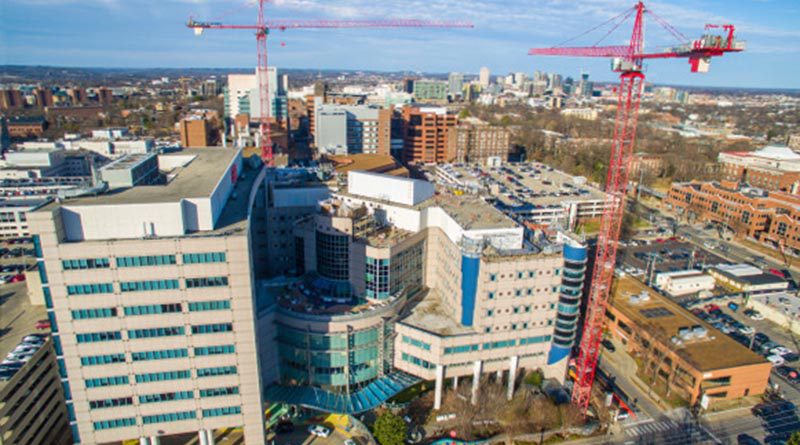 Construction is underway and two cranes are in place at Monroe Carell Jr. Children’s Hospital at Vanderbilt for a planned four-floor expansion that will advance the size and scope of the hospital’s comprehensive array of specialty and subspecialty pediatric health care programs.

The additional space will be built over a 30-month period to provide the necessary square footage to meet the future health care needs of the children and families from Tennessee, the surrounding region and across the nation. Once fully completed, all four floors of new construction will add 160,000 square feet of additional space atop the hospital’s existing structure, bringing Children’s Hospital’s total footprint to over 1 million square feet.

The facility’s expansion is being supported by the Growing to New Heights Campaign, a three-year, $40 million fundraising effort that will help cover the total construction cost of more than $100 million. To date, the Growing to New Heights Campaign total is quickly approaching the $40 million goal. To support the campaign, every member of the Children’s Hospital Board contributed.

“We could not have reached this point and realized our expansion goals without the generous support of our patients and families, community pediatricians, the business and entertainment communities, and especially the Carell family. We are very grateful to you all and very excited for what the future holds,” said Luke Gregory, Chief Executive Officer for Children’s Hospital.

To launch the campaign, the daughters of the late Ann and Monroe Carell Jr.— Kathryn Carell Brown, Julie Carell Stadler, Edie Carell Johnson—and their families, made a cornerstone gift of $10 million. The Growing to New Heights Campaign is led by Brown.

“It has been such an honor to be a part of the Growing to New Heights Campaign. My co-chairs have been so fabulous. The way the community has embraced this campaign has been phenomenal, and I have met so many wonderful people. We are lucky to live in Middle Tennessee where philanthropy is embraced, honored and appreciated. We have so many great things here in Nashville, one of the best being the Children’s Hospital. Everyone has supported it—from individuals to clubs to families that have been patients here, to businesses, corporations, foundations, and the entertainment community,” Brown said.

The first two floors to be completed will provide approximately 80,000 square feet of new patient care space and will include 76 critical and acute care beds for newborns and pediatric patients. The new space will also include family areas, a playroom, a large waiting room, educational space and patient consultation rooms.

The rooms are equipped to support the needs of critically-ill patients but with the flexibility to configure them to maximize the safety and comfort of any type of patient. A new feature in the expansion will be a telemedicine center with the latest facilities and equipment to enable Children’s Hospital physicians to connect and interact with patients and referring physicians anywhere in the world.

The expansion was planned and designed by Donald Blair of Blair + Mui Dowd Architects of New York. Blair has served as planning architect for many of Vanderbilt’s patient care and research facilities. Turner Construction has been hired to carry out the project.